(Los Angeles - September 15, 2013) In nail-biting fashion, action-comedy indie movie Lumpia 2, a sequel to the "ultimate home made" film Lumpia, was officially funded after last-minute pledges boosted the amount raised over the $50,000 goal on Kickstarter before the Sept. 10 midnight deadline.

Supporters tuned-in to the live "LUMPIACAST" webcast to witness the filmmakers and producers behind the campaign push for final donations, acknowledge all their backers, and hit their goal with just 22 minutes to spare. A total of 712 backers pledged $52,238, which means the Filipino-American film Lumpia 2 is "greenlit."

With only 24 hours left in the campaign, Lumpia Writer/Director Patricio Ginelsa of Kid Heroes Productions and Producer/Editor A.J. Calomay of Xylophone Films were still about $18,000 short. Although it seemed like a longshot, a total of over 320 backers pledged over $20,000 on the last day ($10,000 in the last 3 hours) of the campaign. "It really felt like we, the underdogs, just won the Super Bowl in the last few seconds. A big thank you to all the supporters and Lumpia lovers," said Ginelsa.

Throughout the 30-day campaign, Ginelsa and Calomay emphasized the strength in number of backers over the actual amount raised. Calomay stressed, "It's all about building our audience who want see the movies we want to make. We can't expect studios to do it for us. We're grateful to each person who contributed and believed in our vision."

This Kickstarter was launched as a community-based project and served as a platform to promote other filmmakers, artists, and celebrities through original content created specifically for the campaign. Bay Area, Los Angeles, and San Diego 10th Anniversary screenings of the original Lumpia film, presence at large-scale Filipino festivals, and innovative social media tactics, such as the visual #LUMPIABomb fists, helped fuel interest in Lumpia 2.

Plans for Lumpia 2 include shooting in Daly City, CA with most of the original cast. "After 10 years, I'm honored that the fans still came out and pushed for the sequel," said Edward Baon, who will reprise his role as nemesis Tyrone. "It started out as a bunch of us neighborhood kids coming together to make a movie. Only seems right to have the whole community join in and be involved in the sequel. It's gonna be a fun ride!" See the celebratory moment the Kickstarter goal was reached here: FINAL LUMPIACAST (http://bit.ly/16iSjc5)

About Kid Heroes Productions and Xylophone Films: Both Los Angeles based Kid Heroes Productions and Xylophone Films are production companies with a network of talented partners and freelance artists. Their collaborations include the Black Eyed Peas music videos "The Apl Song" and "Bebot" as well as their award-winning videos for Bambu and the Native Elements. They have featured their work on television and in various film festivals having worked closely with clients like Columbia Tri-Star, USC Credit Union, L&L Hawaiian Barbecue, DIRECTV and various independent musicians. For more information, visit: www.kidheroes.net and www.xylophonefilms.com.
# # # 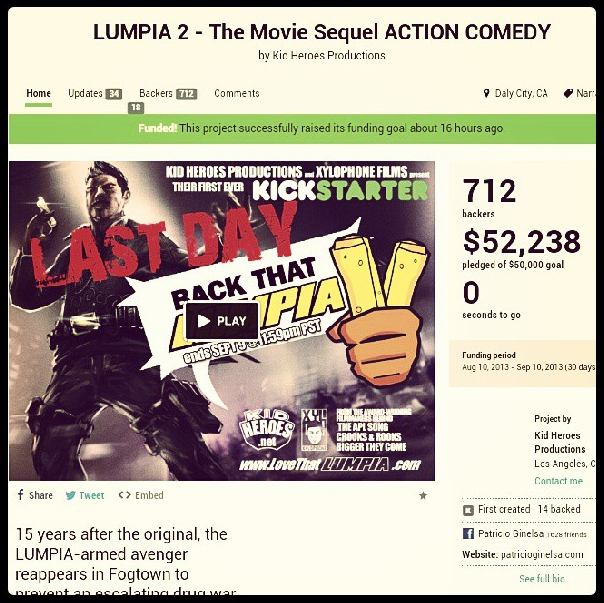